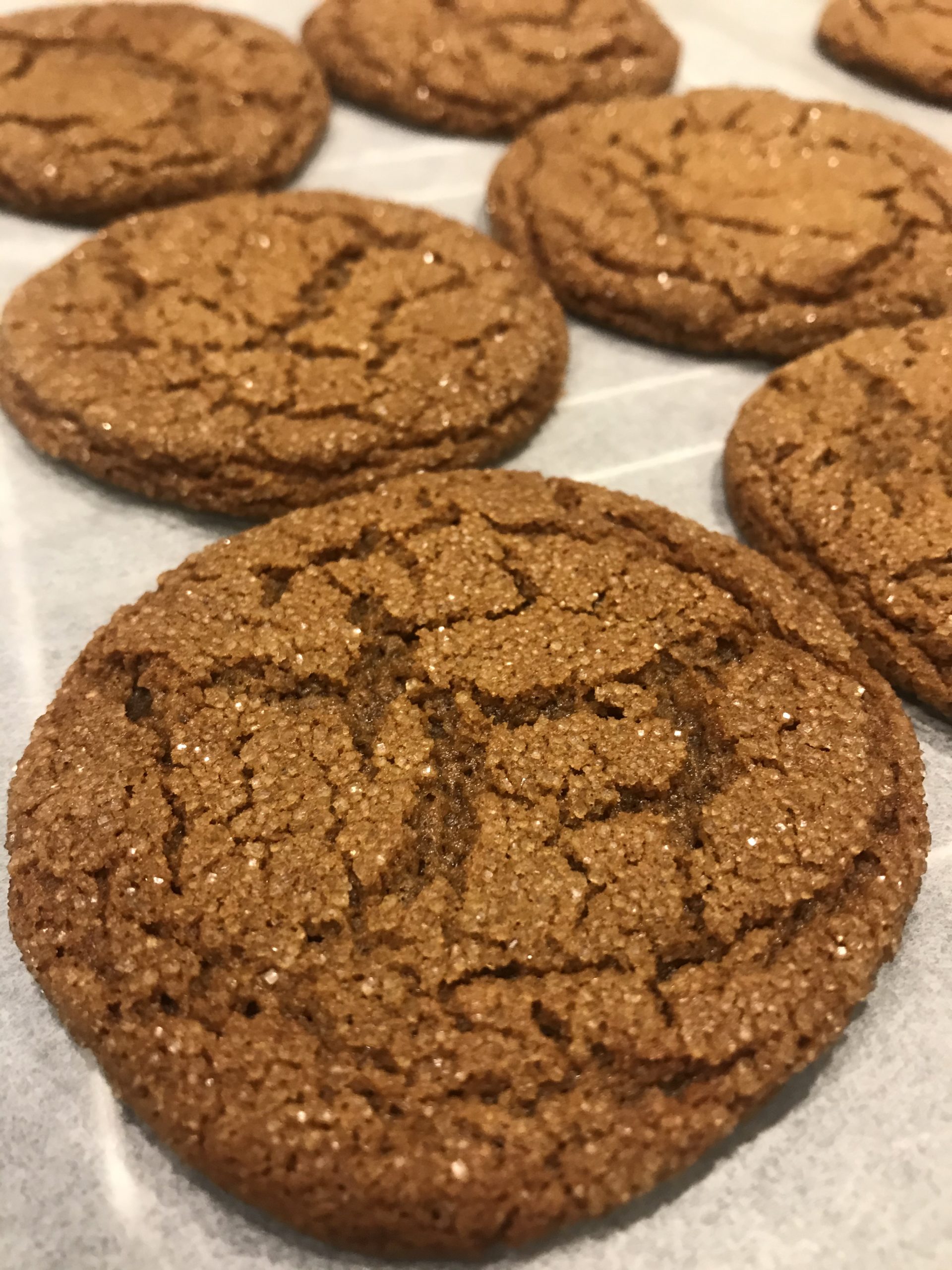 An exercise in understanding the difference between melting and creaming butter

Molasses cookies are not something I would associate with much of anything. It seems that most people who enjoy molasses cookies have some sort of nostalgia for them. No, for me, they are interesting for two reasons; one, they are a very simple and a quick recipe. Two, they are an opportunity to play with big flavors. I love the heat that can come from ginger, and I love the idea of dessert’s flavor that goes beyond just sweetness.

The first time I went to bake them, I realized very quickly that people have a wide range of opinions on how they should be, and the recipes reflect that. Initially, I selected Allison Roman’s Chewy Molasses Cookies, which produced excellent results (I did add some more spices: 3/4 tsp of ground cloves and about a 1/4 tsp of nutmeg): very chewy, moist, and soft cookie. But then after my partner said that they were close to her great-grandmother’s, which her mother confirmed upon tasting, I was curious what that recipe was. Which then made me curious about the differences. I proceeded to look at 23 more molasses cookie recipes, which generated a plethora of questions:

As you can see from the links, many, if not all, of these questions were just a Wikipedia page away, however, these questions made me realize that molasses cookies would be a great way for me to test and try to find some of these answers for myself.

I started with an adapted version of the aforementioned Allison Roman recipe. I wanted more general spiciness and I was looking to achieve heat from the ginger as well, so I again kicked up the spices:

*A note on chilling time:

Up until I tasted them, I thought there was going to be little to no difference. The only thing I really noticed while making them was that the dough felt slightly different when rolling them into balls, the creamed butter dough was stickier. But, upon tasting them, there was a huge textural difference, and in my opinion, the melted butter cookie communicated the spices better. Some other tasters, my father for example, said the exact opposite, that the creamed butter cookie was spicier. As far as the texture goes, the melted butter cookie was much chewier, in a good way I think. The creamed butter cookie’s texture reminded me of the Nestle chocolate chip cookie texture, not cakey but cakey-er, more cookie like, for lack of better words. You can see in the picture that the creamed cookie didn’t spread out as much, which I suspect is part of the reason they were puffier, fluffier.

When I started writing this post, this was about all the information I had on the subject of butter, since then, I’ve found a perfect explanation as to whats going on with creamed butter:

When you cream softened butter and sugar, the grains of sugar are forced through the fat, leaving millions of microscopic air bubbles in their wake. In the heat of the oven these bubbles expand, contributing to the lightness of the finished product. Room-temperature butter is best for aeration (about 67 degrees). If the butter is too firm and cold, air cannot be incorporated into the fat; if it’s too soft and warm, the bubbles collapse.

Butter softens between 60 and 68 degrees and melts starting at 84 degrees and liquefies at 94 degrees. The water in liquefied butter is helpful in certain applications — for example, mixing with flour to create chewy, not crunchy, cookies. Melting frees up water to hydrate wheat flour and produce stronger gluten, hence more chew in cookies or more structure in bread.

So, the chewiness of the melted butter cookies comes from stronger gluten in the cookie. What I called the cakey-ness, or puffiness, of the creamed butter cookie was a function of the air bubbles, created by creaming sugar into butter, expanding when baked.

Also, the kicked up spices answered the question of “How do you convey the heat of ginger?” It’s exactly what I, and probably anybody who took two seconds to think about it, expected, more ginger equals more heat. The heat rang through in both cookies, not on every bite, but just enough that it was enjoyable and the goal was achieved.

And new ones have arisen:

I will have to give my tasters a small break as they have been recently inundated with molasses cookies, but soon enough I’ll test these questions too.